A gory farmyard accident left a young dog fighting for her life after suffering horrific injuries which needed two operations and almost a month’s intensive care to repair.

Willow, a two-year-old English Springer Spaniel, somehow speared herself on the spike of a piece of farm machinery after running off during a night time walk.

Incredibly, she’s now made a full recovery thanks to emergency treatment and three weeks of intensive care here at Paragon Veterinary Referrals in Wakefield, Yorkshire.

Our head of surgery Mickey Tivers, a specialist in small animal surgery, said Willow was extremely lucky to have survived the dramatic trauma.

He revealed the shocking extent of Willow’s injuries, saying: “She had been impaled on a spike which had gone through her chest wall, narrowly avoided her lung and punctured her diaphragm.

“The spike had then passed into her abdomen, grazing her pancreas and narrowly avoiding her small intestine and right kidney, before exiting her abdominal wall.

“The spike went on to pass under her skin to emerge next to her hip causing an exit wound on its way out.

“Willow also had infected fluid in the chest and a fractured rib.

“So, she was very badly hurt but also extremely lucky that her injuries were not even more serious and that she wasn’t killed.”

Mickey and fellow soft tissue surgeon David Barker had to operate twice in a week to repair the widespread internal damage and the gaping wound on her right side of her chest.

Dead and dying tissue around the wound meant the two surgeons needed to use a special dressing rather than attempt to stitch the flesh back together.

Mickey said: “Willow’s wound was challenging to treat as the spike had damaged the tissues around her ribs and caused an infection.

“This meant that the tissues gradually died over a period of days, making the hole bigger and the wound hard to manage.

“We decided to leave the wound open and applied a negative pressure wound therapy dressing, also known as a VAC dressing.

“This is a special dressing, connected to a suction unit, which provides constant negative pressure across the wound to aid healing and deal with the infection.

“In Willow it had the added advantage of also sealing the wound so that there was no leaking of air into the chest.

“This worked very well. Willow was very comfortable with the dressing and went on to make a full recovery.”

Relieved owner Claudia Jackson, a student veterinary nurse from Clitheroe, Lancashire, admits she feared the worst and is full of praise for the Paragon staff who saved her precious pet.

She said: “Willow is a very lucky dog, and we are immensely grateful for everything the Paragon team has done for us.

“She was with Mickey and David for three weeks so a huge thanks to them both and the rest of the fabulous team of vets and nurses. Everyone there has been faultless throughout.

“Thankfully Willow is now fully recovered and back to her usual happy, bright and affectionate self, almost as if nothing had ever happened to her!

“She remained positive throughout the whole ordeal, even when I was not. She continued to fight, and be her happy, amazing self, and her strong will and determination and the excellent standard of care she received has definitely made the difference.” 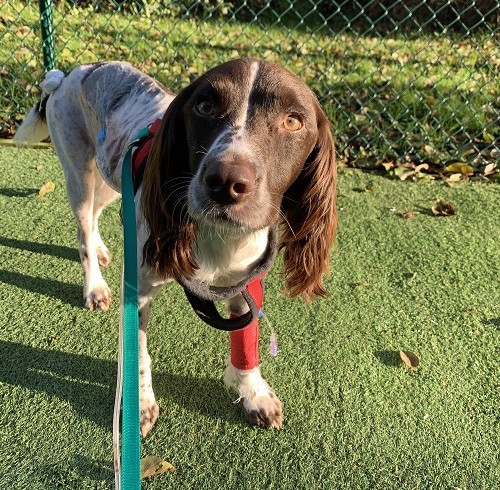