A missing moggy that halted play in a top football match is now happily reunited with her owner thanks to our fantastic team.

Topsey had disappeared eight months ago and was presumed dead until she suddenly reappeared with an impromptu pitch invasion at Sheffield Wednesday’s recent home match with Wigan Athletic.

One of Wigan’s players was quick to tackle the incursion, with Topsey being swiftly picked up and passed to a steward for safe keeping.

She was referred to us here at Paragon Veterinary Referrals, where our neurology resident Michal Mol uncovered the extent of her injuries.

Michal said: “Topsey underwent CT and MRI scans and was diagnosed with a fracture of a vertebrae in her neck, severe ligament damage and spinal cord compression.

“In this case surgery didn’t seem necessary at this point, and we treated Topsey with strict cage rest and pain management.

“She was with us for ten days and gradually got better every day. Towards the end of her stay in hospital she was walking with confidence, with a good range of movement in the head and neck.

“Finally, she was allowed home with her owner to administer a course of antibiotics.

“We are very optimistic about Topsey and her recovery. We think she is going to do well.”

Owner Alison was certainly delighted to welcome her home and bring Topsey’s incredible ordeal to an end.

Alison said: “She went missing last June. We were going away and I was taking her to a cattery and she escaped out of the cat box and we never heard anything again.

“Then my daughter-in-law rang me as they were watching the match and said there was a cat on the football pitch. I sort of laughed it off.

“She ran on the pitch and one of the Wigan players picked her up and passed her to a steward. A vet in the crowd came forward, I think he knew she was injured and took her to the vets.

“It was at this point they scanned her for a microchip and called me to say they’d found my cat. That was the first time I realised it really was her.

“She’d got some bites on her neck, like a dog may have grabbed her and shook her, so she was a bit scared. Now I think she is just happy to be home, I really do!”

Topsey went missing near Worrall, about 2.5 miles (4km) away from Hillsborough but where she’d been and what she’d been doing for the previous eight months remains a mystery. 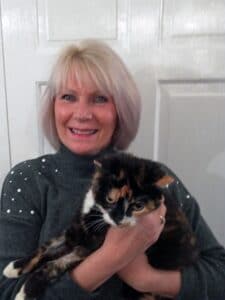