Here at Paragon, we are urging dog owners to be vigilant after treating a case of the potentially-fatal infection lungworm in a young Sprocker Spaniel.

One-year-old Poppy was seriously ill when she was referred to us, after a dramatic deterioration in her health over the previous fortnight.

She was lethargic, wheezing as she breathed and suffering from a persistent cough and her owners were growing increasingly worried about her condition and behaviour.

Happily, her condition was treatable and after a period of intensive care here at Paragon, Poppy was well enough to go home.

Lungworm is a parasitic infection which is on the increase in the UK and dogs become ill after eating slugs or snails infected with the lungworm larvae.

Jane Scott, our advanced practitioner in small animal medicine, said: “Poppy presented to the medical team with a two-week history of lethargy at the end of her walks, increased respiratory noise and a cough.

“On examination, Poppy’s respiratory rate and effort were increased with crackles when listening to her lungs.

“She was admitted to the intensive care unit where she was placed on oxygen therapy with close monitoring of her blood oxygen level, mucous membrane colour, respiratory rate and heart rate.

“A CT scan of the chest revealed severe and widespread thickening of the walls of the small airways, with complete obliteration of the airways in places.

“A blood test for lungworm proved positive and so Poppy’s respiratory problems were countered with oxygen, bronchodilators and anti-inflammatories, allied to a long course of anti-parasitic medication.

“Happily, Poppy had clinically improved within a couple of days so was discharged to continue with her treatment at home, where she continues to improve.”

Poppy was one of the lucky ones with Jane revealing the serious impact lungworm can have on a dog – and how infected pets can go on to spread the infection through their faeces.

She added: “Dogs become ill after eating slugs or snails infected with the lungworm larvae or even by licking the slime trails that are left behind.

“The larvae mature and migrate around the dog’s body, ending in the heart and pulmonary artery. They’ll then lay eggs which go on to mature inside the dog and cause heart trouble, bleeding and breathing problems.

“Dogs start coughing to try to dislodge the larvae and some immature parasites can be displaced, although, instead of expelling them, the dogs often swallow them again and go on to excrete them in their faeces.

“This in turn helps infect more slugs and snails and creates an on-going and growing cycle of infection.

“If you suspect your pet may have lungworm, you need to seek veterinary help at the first possible opportunity.” 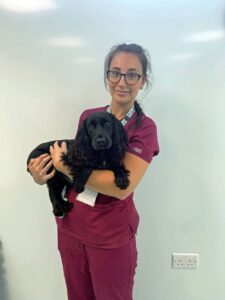