Crushed William back on all fours thanks to Paragon

A Dachshund puppy who sustained horrific injuries when he was crushed under the wheels of a car is back on all fours thanks to the swift work of two Yorkshire vet practices.

After swift work to stabilise him by Calder Vets, in Waterloo, William was referred to sister practice Paragon Veterinary Referrals, in Wakefield, for further intensive treatment.

Following a series of operations, William was well enough to go home just a week later.

John, who works at his father’s scrapyard in Linthwaite, near Huddersfield, explained: “William somehow sneaked his way out of our offices and into the yard and he was unfortunately run over by one of our customers.

“I was on site in a wagon and heard this awful scream behind me and knew something terrible had happened – you wouldn’t believe such a small dog could make such a loud noise.

“I had no idea then what had happened, I only found out later from my Dad, Mark, who had seen the accident, but I knew William was in serious trouble because he was screaming so much.

“I just scooped him up, put him in the car and drove straight to Calder Vets but I must admit I honestly wasn’t sure anything could be done for him.

“William was just lying there drifting in and out of consciousness and I feared he’d have to be put down.”

Vet Helen Hirst had other ideas and quickly got to work stabilising William, delivering pain relief and putting him on a drip.

She then arranged a referral to Paragon, the new £5 million vet centre in Wakefield, where William received emergency treatment from the small animal team.

Experienced orthopaedic surgeon Mark Tonzing, who led the treatment at the multi-disciplinary centre, revealed: “William was extremely fortunate that none of his vital organs were damaged in the accident.

“However, our CT scan, X-rays and ultra-sound tests showed he still had a number of key injuries, mostly fractures, which all needed addressing.

“First we had to check the surrounding nerves and blood supply had not been damaged and then we set about repairing the injuries.”

The various operations were performed over a number of days, with anaesthetist Eva Psatha’s expertise vital in managing so many procedures in such a short space of time allowing William to be discharged just a week after his emergency admission.

John said: “Telling my partner Megan what had happened was awful. It was her idea to buy a dashchund pup and she really loves William.

“We were both very worried but as soon as we walked into Paragon we knew it was the right move. It is an amazing place and the staff were unbelievable from start to finish.

“They never once mentioned putting him down or anything like that. They were only interested in assessing his injuries and making him better.

“Now they’ve done that and if it wasn’t for where they’ve shaved off his fur so they could operate, you wouldn’t know there’d been anything wrong with him.”

Mark added: “He was definitely a fighter. When I first saw him he was quite poorly and understandably a bit quiet but he recovered fairly quickly and was soon bouncing back.

“The day after his last surgery he was already eating and drinking and even taking a few steps. There’s every reason to be hopeful he will make a good recovery once everything is fully healed.” 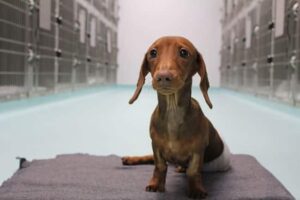