Police Dog Back in Action Thanks to Paragon

A hero police dog will soon be back on the beat after successful surgery to repair a complicated fracture here at Paragon.

Sniffer dog Winston suffered a fracture just above the elbow while exercising in a field with his handler PC Lee Schofield of South Yorkshire Police.

The eight-year-old Springer Spaniel was referred to Paragon, where orthopaedic surgeon Nick Blackburn took charge of his treatment.

Nick, an RCVS advanced practitioner in small animal surgery, said: “Unfortunately, elbow fractures are extremely common in the English Springer Spaniel breed and a CT scan at Paragon confirmed that Winston had suffered a fracture to his left humeral bone.

“These fractures are considered to be at the most difficult end of the spectrum due to the shape of the fracture and the fact that it involves the elbow joint.

“The operation was challenging and lasted approximately two and a half hours as we carried out a surgical fracture repair with screws and plates.

“Everything went well and Winston has responded positively to the treatment so should be back at work soon.”

PC Schofield added: “We were very lucky that Winston’s treatment was in the hands of orthopaedic surgeon Nick and the Paragon team.

“He’s doing well and looking forward to getting back to full strength and out on the streets again.” 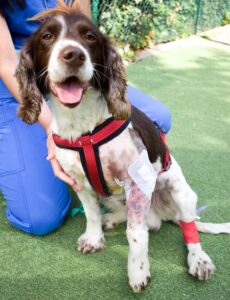