Inspirational Paragon employee urges others to seek the help they need

An inspirational woman who sought help from Paragon 13 years after she made the heart-breaking decision to have her baby’s life support turned off has urged others with mental anguish to seek the support they need.

Nicola Challice, a credit controller at Paragon, lost her baby, Ethan, in 2007, when he was just five days old.

During her 20-week scan, doctors said there was a problem and she was referred to John Radcliffe Hospital in Oxford.

Doctors there told her and her then-husband that their baby had a congenital diaphragmatic hernia (CDH) and had just a one in 2,000 chance of survival.

A CDH is where an absent or partially formed diaphragm results in an abnormal opening (hernia) that allows the stomach and intestines to move into the chest cavity and crowd the heart and lungs.

Ethan was born but was so poorly he was put on life support immediately. Five days later, Nicola was faced with making a decision no parent should have to make, and Ethan’s life support was turned off.

Nicola said: “Terminating the pregnancy was one of the two options I initially had, but he was conceived through IVF after three years of trying to conceive naturally so I couldn’t do it. If there was even the slightest chance he would survive I was going through with the pregnancy.

“When he was born, his heart was damaged and only one lung was working,” said Nicola. “The doctors told us there was absolutely nothing they could do for him.

“I didn’t want my baby suffering. Ethan would have had absolutely no quality of life. I knew the decision I had to make so, after five days, I agreed they should turn off Ethan’s life support, and he passed away.”

The hospital offered her grief counselling, but Nicola said it was something she couldn’t even think about at that time.

After this, she said no further offer of help or follow-up care was offered and she feels she got “lost in the system”.

Ethan was cremated and, shortly after, Nicola packed up and left her home behind, moving two hours away, in an attempt to escape her grief. She said it is only recently she realised how much mental damage she was causing herself and has now sought help.

She said: “I have worked for the same company for four years and it can be a very stressful job. I had always handled it well, but I started taking my stress home with me.

“I started reacting inappropriately and my temper and moods were getting the better of me. I realised I had not dealt with Ethan’s death, or the guilt I felt over it.

Nicola realised she needed to talk to someone and so approached the HR department at Paragon, which is part of the Linnaeus Group, who immediately put her in touch with someone at BUPA healthcare.

“It has been an absolute godsend,” said Nicola. “I am so grateful to Paragon for making sure this help is available to staff and for being so supportive.

“The counsellor has helped me see that there was nothing I could have done to save Ethan.”

Lacing up the running shoes

Nicola, who now has a partner and two children, took up running following the birth of her daughter, after her mental anguish led to her over-eating and drinking and her weight increased.

In five years she has lost five stone, her passion for running has grown, and she has just secured a place in 2020’s London Marathon, which she will run in aid of Make a Wish Foundation.

She said: “I am delighted to be doing it for this cause. Ethan never got to live any of life’s experiences and my children have everything they need, so to be able to help a critically ill child experience something they have always dreamed of is something quite amazing.”

Nicola, who turns 40 this month, is keen to let others know that mental health counselling is available to those who are suffering.

She said: “I talk to my colleagues at work about it. I want them, and everyone, to know that you don’t have to suffer in silence and keep it all boxed in.

“Don’t be embarrassed about talking to someone and seeking help, and remember it can be done in complete confidence if you choose.

“It doesn’t matter if you seek help straight away or, like me, don’t realise just how badly you are dealing with something until years later.

“I will never get over losing Ethan but thanks to the support I have received, I can live my life without always blaming myself for him going.”

Nicola needs to raise £2,000 to compete for Make a Wish in the marathon and has just hit the £1,000 mark, thanks to a generous donation of £500 from Linnaeus. To sponsor her, visit https://bit.ly/2X9FwKL. 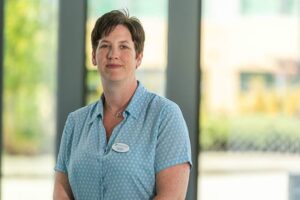