Meredith has new appetite for life after spleen removal

When a young pup became ill, her owner had no hesitation as to where to turn for help – as she is lucky enough to work at Paragon Veterinary Referrals.

Meredith the German Shepherd was approximately five months old when owner Debra Scuffham, referral hospital manager at Paragon, noticed she had been vomiting and had a bout of diarrhoea.

She took Meredith to her colleagues at Paragon who swung into action and the poorly pooch was initially examined by intern Daniel Kenny and internal medic Adam Bell, while clinical director and ECC specialist Sophie Adamantos was on hand to help.

An x-ray and ultrasound scan were performed which revealed she had not swallowed any foreign bodies.

But a CT scan later revealed that Meredith had a splenic torsion – or twisting of the spleen.

The next day she was admitted to hospital where soft tissue surgeon David Barker removed her spleen, and also extracted a mini spleen which he discovered during the operation.

Debra said: “The team have done an excellent job and Meredith was in the best hands.

“If it wasn’t for the scar, you would never guess she had been operated on. I picked her up the following day once her anaesthetic had worn off and she was in fine form. It was strange as I thought she would try and milk the situation a little bit.

“Meredith has always been a bright pup, I didn’t realise she could be any more energetic and she certainly keeps me on my toes

“Fortunately, dogs can have a normal life without their spleen.”

It is not known how Meredith developed the splenic torsion, which very rare in dogs of her age. 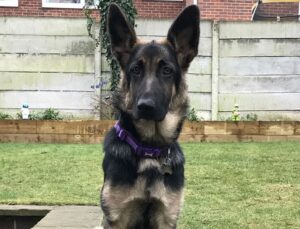