A dog which was found unconscious on a railway line before being diagnosed with four skull fractures has made a miraculous recovery thanks to swift intensive care carried out at a Yorkshire vet centre.

French Bulldog Finn was discovered on the tracks between Leeds and Skipton with a severe wound on his head and damage to his right eye. The 20-month-old dog also suffered two seizures, couldn’t walk and wasn’t aware of his surroundings.

Owner Richard Greenwood was told to expect the worst but after Finn was stabilised, he was taken to Paragon Veterinary Referrals, in Wakefield, where he was given intensive care and rehabilitation and the need for surgery was avoided.

Finn gradually improved over the following week and was discharged in time to spend Christmas with his grateful owner.

Richard said he believes Finn fell onto the tracks when chasing another animal and could have been hit by the undercarriage of a passing train.

Richard, from Steeton, West Yorkshire, works as a nurse in London and had left Finn with mum Linda at her stable yard near Skipton, where the accident happened.

“Usually Finn is there all the time – he’s like a shadow,” said Richard. “They were walking through the stable yard with him on the lead, and as she was going into the tack room, he bolted for something and the lead slipped out of her hand. She put down what she had in her hands and when she turned around, he wasn’t in sight.

“She went searching for him in the field and when she looked over the wall, Finn was between the rails with a large cut on his head. We think he could have been chasing something.

“At first, we thought there was no way he could have been hit by a train but it’s possible he crouched down and something on the bottom of a train hit his head.”

Finn was stabilised at Kingsway Vets in Skipton but had two seizures overnight and started howling when he was taken off sedation – at which point it was assumed he had suffered brain damage.

However, Richard was delighted to discover his beloved pet still recognised him.

“I’m a nurse, so I know that people with head injuries aren’t going to wake up in five minutes,” he said.

“I kissed him on the head and said his name and he lifted his head up.”

Buoyed by his response, Kingsway referred Finn to Paragon where he was treated by Ben Safrany, Paragon’s advanced practitioner in small animal internal medicine.

Ben said: “We really don’t really know what happened to Finn. Even though his injuries were dramatic I would have expected much worse had he been hit by a train.

“For the first couple of days we needed to keep him sedated and on potent analgesics to manage his neurological signs and pain.  He also required oxygen supplementation as he had some injuries to his lungs.

“After the first 36 hours with us his treatment was on-going supportive care – intensive monitoring, pain relief, fluids, regular neurologic assessments, physiotherapy and rehabilitation. His eye was quite badly injured too, so he had regular antibiotic and anti-inflammatory drops.

“The referring vets, Kingsway, did an amazing job with Finn in the first few days after his accident and we were delighted to be able to nurse him back to health.

“Finn will need ongoing rehabilitation and TLC at home but we expect him to make a full recovery, which is fantastic news.”

Finn can’t see from his damaged eye but he is unlikely to need surgery in the future and is now enjoying life back at home with Richard.

“Now he is just Finn again. It’s amazing. It has been a rollercoaster of emotions,” said Richard.

“Every step he made I was thinking it wasn’t going to be enough, but I slowly allowed myself to relax. He is my best friend and we were so happy to get him home in time for Christmas – the timing couldn’t have been better.

“I’m so grateful for everything Kingsway and Paragon did to help save him.” 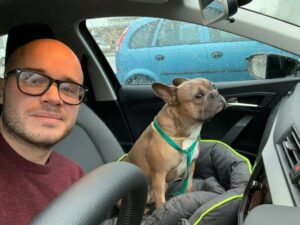