Gunther, a handsome Poodle was presented to our ophthalmologist David Habin, due to a fast growing mass of 1.5cm on his right lower eyelid.

David decided to perform an excisional biopsy and sent the mass for histopathology, which showed that Gunther had an aggressive melanoma, which is a tumour that has a high chance to metastasize and recur.

Gunther was therefore referred to the Oncology Dept, where the Oncologist, Dr Rodney Ayl, advised a head to tail CT scan, to stage the disease and to make sure there were no distant metastases, or any other problems. The CT scan was performed three weeks later, and unfortunately a recurrence of a 1cm mass was already noticeable. The imaging showed no evidence of metastatic disease.

At this point, as any other surgery was not an option without losing Gunther’s eye, the only local treatment that Gunther could undergo, available at Paragon Referrals, was Superficial Radiation Therapy.

When he started the therapy, the mass was about 2cm and Dr. Ayl opted for a coarse fractionation (high dose) radiation protocol of four sessions once a week. The treatments were done on an outpatient basis and given under a short general anaesthetic that lasted a total of 30 minutes.

Gunther did not experience any side effects until 3-4 weeks into the treatment. He started to rub at his eye and required a buster collar and some antibiotic eye drops, which rapidly resolved the problem.

He was rechecked two weeks after the end of the Superficial Radiation Therapy, and the melanoma was reduced to 0.5cm, and will continue to regress over the next few months. Gunther is very happy and even though he has lost some hair on the treated area, he is still a very handsome boy!

Due to the high risk of metastases, systemic therapy is also recommended. Gunther has started immunotherapy with a melanoma vaccine protocol, that hopefully will help his body fight off the remaining cancer cells.

Request Advice
Find out more about our SRT service 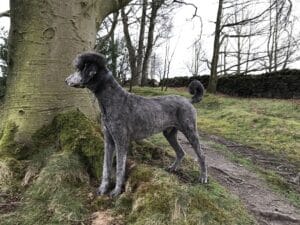