Vets here at Paragon have successfully removed a huge 5kg tumour from a cancer-stricken Dalmatian.

The life-threatening, malignant tumour was cut free from the abdomen of four-year-old Penny by soft tissue surgeon David Barker.

The operation required plenty of help from colleagues due to its incredibly-challenging nature and because the tumour was so big and so heavy. Fellow surgeons Dan Kenny and Kat Grzywa both assisted throughout the surgery.

David said: “Penny presented with suspected ascites, given a large volume of peritoneal effusion. Her abdomen was very swollen and taut

“We performed a contrast-enhanced CT scan with an iodine-based contrast to help highlight the areas of the body we needed to examine and the results were startling.

“The mass was enormous. It almost completely filled the abdomen.”

The dramatic CT images showed that the mass had originated in the right kidney, which had been displaced into the left side of the abdomen, and also compressed the rest of Penny’s internal organs. There was no evidence of metastatic disease.

David added: “A right ureteronephrectomy was performed and the large cystic parts of the tumour were dissected free from the omentum, the peritoneum and the retroperitoneal vasculature.

“The surgery was really difficult because the mass was so large and heavy, and it required extra surgeons to hold and manipulate the mass, while its vasculature was dissected and ligated.

“Penny made a good recovery from the anaesthesia, her blood renal parameters remained normal throughout her recovery, and she was discharged 48 hours later. Histopathology later confirmed the mass to be renal carcinoma.” 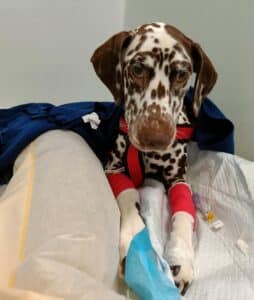