Vet’s Quick Cure for Dog That Was Deaf for Years

A dog that had been deaf for two years was cured inside two hours after expert treatment here at Paragon.

Poppy, a six-year-old Cavalier King Charles Spaniel, underwent the life-changing treatment and is now back to her best.

She’s also able to fully enjoy her favourite film, The Sound of Music, again and happily barks away once more as Captain von Trapp whistles his children together in a memorable scene from the famous movie.

Sian Harries, our advanced practitioner in small animal dermatology, said: “The owner’s granddaughter loves The Sound of Music and watches it repeatedly.

“When Poppy was younger, she would always bark at the scene where Captain Georg von Trapp introduced his children with his whistle.

“She stopped doing that more than two years ago as she became deaf but when it was on television again recently, she barked again when the scene came on which was obviously a magical moment for Poppy and all the family!”

Sian discovered the cause of Poppy’s deafness was a condition called primary secretory otitis media, very similar to what’s called ‘glue ear’ in children, and is caused by the middle ear becoming filled with thick fluid.

The result was a profound one, with Poppy left deaf, but the solution was very quick and relatively simple.

Sian added: “Holes were placed in her ear drum under video otoscopic guidance and the thick contents gently teased out to drain her middle ear in both ears.

“This is a routine procedure in referral dermatology practice and took less than two hours with Poppy’s hearing instantly improved.”

Poppy’s owners, Stuart and Jackie Drabble, from York are naturally delighted with the outcome and say their treasured pet has been transformed.

Jackie said: “The treatment at Paragon has resulted in Poppy’s hearing being fully restored and has completely transformed her life.

“She is so happy again and constantly by our side.  It is only with the return to normal that we now realise how quiet and withdrawn she had become.”

Stuart is full of praise for Sian and the staff at Paragon, adding: “The care provided by Paragon, particularly at this difficult time with the virus, has been exceptional.

“At all times, the care has been friendly and yet, thoroughly professional.  They took great care to explain the procedure and kept us fully informed.

“The overall customer service by all the staff has been faultless with remarkable attention to detail. We have no hesitation in recommending Paragon to our friends and relatives.” 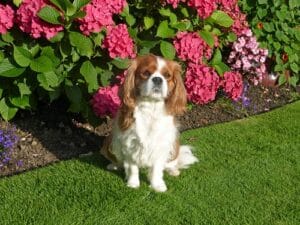